2 days ago, Entertainment Weekly revealed the exclusive first look of Jennifer Lawrence as Katniss Everdeen in The Hunger Games. The 20-year-old Oscar nominee was first turned onto Suzanne Collins? beloved dystopian trilogy, about children forced to fight to death to amuse a brutal government, last Christmas. Her mother, who runs a summer day camp in Lawrence?s hometown of Louisville, Ky., lent her her own dog-eared copies and Lawrence fell fast and hard. As she gobbled down the books, two scenes stuck out as ones that would be a particular thrill for any actress to play. With filming on Gary Ross? movie kicking off this week in North Carolina, she?s living the dream. 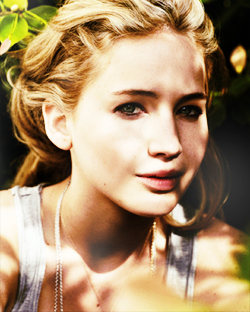 Her No. 1 scene from The Hunger Games:

?The first time that Katniss has to go into the cylinder and she goes up into the arena and looks around and sees it for the first time,? says Lawrence.

?Knowing that when that trumpet blows she could die. The thing that?s great about her is she?s not a murderer. She?s a hunter, but she?s not a killer. I told Gary, ?I totally understand if you don?t hire me, but please remember that after Katniss shoots a bow and kills someone her face cannot be badass. It has to be broken.? She has to be heartbroken because she just took another person?s life. It?s so tempting, especially with a cool, big budget franchise movie, but we have to remember that she?s a 16-year-old girl who?s being forced to do this. These kids are only killing each other because if they don?t, they?ll die. It?s needless, pointless, unjustified violence. So there?s nothing cool about her. It?s not like she looks around the arena and goes ?Yeah, I got this, I?m going to do this.? I think she looks around terrified and thinks, ?Well there are all the million different ways that I can die.??

Her No. 1 scene from the entire trilogy, however, comes from the second book:

?It?s from Catching Fire,? she says. ?When she finds out that she has to go back and she runs in and has a complete meltdown ? I remember reading that and being like ?I want to act that!??