People’s Choice Awards 2012 Pre-Nomination Voting has just begun and we can be really satisfied with the results. ‘X-Men: First Class’ is nominated in 3 categories such as ‘Favorite Action Movie’ and ‘Favorite Ensemble Movie Cast’. 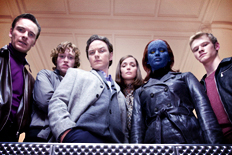 That’s the only the pre-nomination voting. The top five in each category will become the official this year’s nominees of People’s Choice Awards 2012.

Jennifer is nominated for an Oscar!