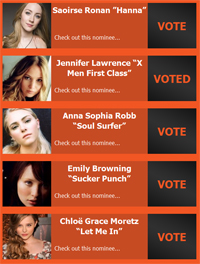 Yesterday, Youth Rock Awards let me know that Jennifer Lawrence is nominated in Rockin’ Actress category for her outstanding performance as Mystique in “X-Men: First Class”!

On the list, there are also: Emily Browning, Anna Sophia Robb, Chloe Moretz and Saoirse Ronan, so we can?t let Jennifer just having been beaten! Keep voting here!

Source: YouthRockAwards.com The First Annual 2011 YOUTH ROCK AWARDS will rock Young Hollywood on Wednesday, December 7th at 7PM. Held at the historic Avalon Theater in the heart of Hollywood, the event will boast a star?studded red carpet, celebrity nominees, live performances by todays biggest stars plus an exclusive VIP after party.

Only 20 days left to vote, so don?t forget to cast your vote!

New photo of Jennifer Lawrence on the set of ‘The Silver Linings Playbook’ in Philadelphia.