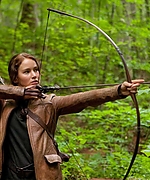 And we have another sneak peak of Jennifer as Katniss Everdeen! Unfortunately it’s only one medium quality still, but I’m still looking for bigger version, so stay tuned! In the meantime, you can view small pic in the photo gallery, just click on the thumbnail on the right. What do you think about it?

Examiner.com: The image features Katniss in the midst of shooting her bow — something fans know she does quite a bit in The Hunger Games. Based on her outfit, this appears to be from earlier in the movie, when she’s out hunting in the woods near District 12 with Gale.

The outfit looks similar to what she’s wearing in another photo, in which Lawrence is joined by Liam Hemsworth as Gale. Later, when Katniss enters the Hunger Games, she wears a slightly different outfit.

I’ve added bigger version, you can see it in the photo archive! ;-)

Interview: Jennifer Lawrence is ready to go where films, fame take her