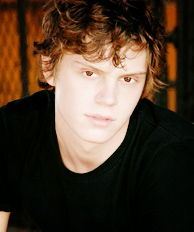 Evan Peters, an American actor who is most known for his role in American Horror Story has recently talked to NYMag.com about his character Tate Langdon, fangirls, Hunger Games audition and Jennifer Lawrence! Here’s what the young actor said about our Jen:

You tested for the role of Peeta in Hunger Games, right?
I did, yeah. That was really cool; I got to do a scene with Jennifer Lawrence. I was nervous as hell, because she?s such a fantastic actress. And the movie is such a great story ? I love all those books. I can?t wait to see the movie. I?m so psyched.

Have you seen the trailer?
Yeah, it looks amazing. And I love Jennifer Lawrence. She?s a total fox. And such a good actress. It?s ridiculous.

Full interview with Evan you can read here. What do you think about him? Do you watch American Horror Story? ;-)