From budgets and salaries, to the accident that sent star Jennifer Lawrence to the hospital, the new issue of The Hollywood Reporter features director Gary Ross and never-revealed details about the fast-approaching pop culture phenomenon, in theaters March 23.

The first of four parts in Suzanne Collins’ massively popular book series The Hunger Games, about two dozen children randomly chosen to compete for survival, opens March 23 on more than 4,000 screens across the country. The film’s reception could determine whether its stars ? Jennifer Lawrence, 21; Josh Hutcherson, 19; and Liam Hemsworth, 22 ? ascend to Kristen Stewart-Robert Pattinson-Taylor Lautner superstardom and fill the gap opening as Twilight heads toward its final chapter. 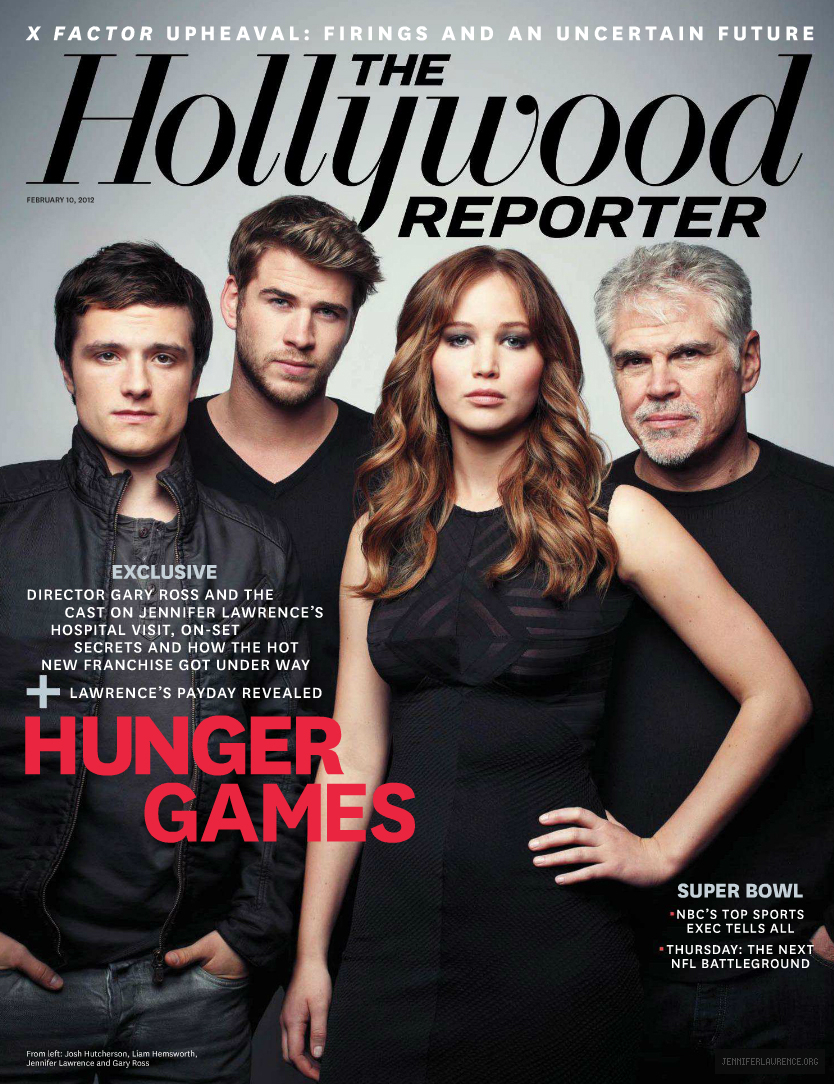 For Lionsgate, which has struggled recently at the box office (Abduction, Conan the Barbarian), Games is its first major test since acquiring Summit Entertainment, the studio behind The Twilight Saga franchise, in January ? a move that yokes together execs responsible for the most recent youth phenomenon with those hoping to launch the next. Games? success could impact the future of many at Lionsgate, all eager to claim credit for the Collins adaptation, now that the film division has named Summit?s Robert Friedman and Patrick Wachsberger to run it.

?After the trailer launched Nov. 14, we had 8 million views in the first 24 hours,? says Lionsgate Films president Joe Drake. ?We were the number one Twitter trend on the planet. Since then, the book sales have jumped 7.5 million copies. That kind of data gives us enormous confidence.?

Hollywood Reporter executive editor, features, Stephen Galloway, was tasked with talking to director Gary Ross and cast on the cusp of their potential superstardom. The Oscar-nominated Ross and others close to the movie revealed many previously unknown secrets surrounding the highly-anticipated film.

Here are some of the never-before-revealed details from THR’s cover story:

1. JENNIFER LAWRENCE TOOK THREE DAYS TO SAY YES TO THE ROLE OF KATNISS
Numerous actresses were considered for the lead ? among them Hailee Steinfeld (True Grit), Shailene Woodley (The Descendants) and Abigail Breslin (Little Miss Sunshine) ? but Ross never felt he had the right person. Then he met Lawrence, fresh off an Oscar nomination for Winter?s Bone, the 2010 indie release that put her on the map. But Lawrence hesitated, aware this could take her from being respected by her peers to the center of a pop-culture tornado ? precisely the fate that had befallen Stewart with Twilight.

?It was the middle of the night in England, and I was in bed when I got the call,? she remembers. ?And I was so in love with the books and the script, and suddenly it was right in my face ? and the size of the decision was terrifying.?

Her mom helped in the decision. “I called my mom and she called me a hypocrite, because when I was doing indie movies and everyone was asking why I didn?t do studio movies, I said, ‘The size of the movie doesn?t matter.’ And she said, ‘Here?s a movie you love and you were thinking of turning it down because of its size.’ I thought, ‘I don?t want to miss out because I?m scared. Me being scared, I never want that to stop me fromdoing something.’ But I knew in my heart that I wanted it ? it was about working out all the fears.”

2. SO HOW MUCH IS LAWRENCE GETTING PAID?
Lawrence’s salary for the first film is a modest $500,000 (about what Stewart received for the first Twilight), plus ?escalators,? bonuses based on the movie?s performance.

3. DIRECTOR GARY ROSS AND PRODUCER NINA JACOBSEN HAD STEEP COMPETITION
4. HOW MUCH THE MOVIE COST
5. THE LEAD TRIO IS CONTRACTED FOR ENTIRE FRANCHISE
Ross already is committed to the first sequel, Catching Fire, which he hopes to start shooting in September from a script by Simon Beaufoy (Slumdog Millionaire), and the three young stars all are signed up for the full franchise.
6. LAWRENCE’S ACCIDENT ALMOST HALTED FILMING OF ‘HUNGER GAMES’
On the last day of her six-week training phase, in which she?d become an expert at using a bow and arrow, climbing and jumping, Lawrence hit a wall ? literally.

?I had to do 10 ?wall runs,? where you run at the wall as hard as you can to get traction,? she recalls, explaining that her trainer would make her race at a wall with maximum speed to gain the momentum needed to propel her up. ?I ran at it and my foot didn?t go up, so I caught the wall with my stomach. My trainer thought I had burst my spleen. I had to get a CAT scan and go into a tube where they put this fiery liquid in your body.? Fortunately, she was in great shape from her previous film. ?I was still pretty bulked up from X-Men: First Class,? she says. ?So a lot of the training was getting muscle back, heightening the muscles without building them. I loved the archery ? well, I have a love-hate relationship with it.? With her trainer holding her hand, Lawrence learned she was badly bruised but nothing was broken ? and work could continue.

7. THE ‘HUNGER GAMES’ SET HAD 100-DEGREE HEAT AND BEARS
8. THE ‘HUNGER GAMES’ CAST HAVE NOT SEEN THE FILM YET
Investors have pushed the Lionsgate stock up in the weeks since the Summit deal, partly because they think combining Twilight?s executives with the Games fan base will work magic for this new franchise. But few people ? and none of the cast ? have yet seen the finished film, despite a worldwide marketing campaign that ranges from action figures to nail polish. Everyone, everywhere, is waiting to see if the movie delivers.
9. LIAM HEMSWORTH’S BROTHER TOLD HIM TO LOSE WEIGHT