Jennifer Lawrence was spotted yesterday at airport in Mexico City. Without makeup and wearing sunglasses, Lawrence, with a serious expression, went to the exit, escorted by four bodyguards. The actress who was in the film “The Burning Plain” — the debut from the director Guillermo Arriaga, was recognized by three fans who yelled “?Bienvenida a M?xico!” (“Welcome to Mexico!”), but they were ignored by Jennifer who got into a van and left the place.

What is she doing in Mexico right now? Well, she is promoting The Hunger Games with Liam Hemsworth here by attending a press conference and giving some interviews. They are also going to honor the winners of a rally about the Hunger Games in the amusement park Six Flags. They are staying in Mexico until Saturday. Then, according to some sources, they are flying to another country to promote the film. 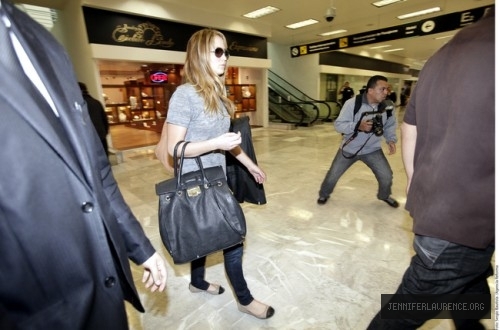 “They didn’t ask for silk sheets or pink curtains. They came completely available. They’ll have their suites, but nothing unusual,” said a source. “In fact, they didn’t bring hairdressers or makeup, as it’s often done. They’ll have it all here.”

I had been looking for more information on that matter as well as more photos, but I found only 1 pic :-(. We’re all waiting for more; in the meantime you can visit the photo gallery and see the latest photos of Jennifer ;-)

I’d like to thank for help with Spanish our reader, Nath?lia! :* I don’t know Spanish at all! and without her help I wouldn’t manage it… Thanks again!