I’ve updated the photo gallery with photos of Jennifer Lawrence taken for Glamour Magazine (US) by Alexei Hay. Unfortunately they are small, thus we have to wait for bigger ones :( In addition, I have for you some exerpts of the interview! If you’re curious about what she has to say on dieting, fame and her public life, I encourage you to read this! :-) 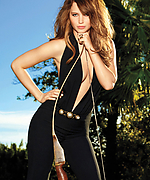 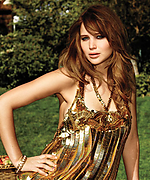 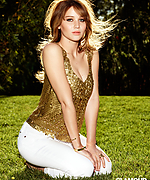 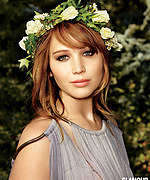 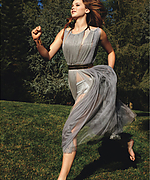 Photoshoots — Alexei Hay for Glamour US

Her first thoughts about The Hunger Games being turned into a movie?

When I heard they were making the movie, I was like, ?oh, that?s nice?they?re going to ruin another great book.? But then I met Gary [Ross, the director], and he was unbelievable and brilliant and genius.

On taking on the role of Katniss in The Hunger Games?

I gave myself three days. I knew from reading the books that I loved The Hunger Games. I just didn?t know if it was worth changing my life for. I?m at a peaceful place right now. The people who used to ignore me at parties, now they?re nice to me and kissing my ass. But nobody?s staked outside my house. I wanted to make sure that when I said yes, I wouldn?t regret it. And I don?t regret it. I would have said no because I was scared, and then I would have been that bitter actress telling my grandkids, ?I?m the one that turned it down.?

On getting in shape and dieting?

I hate saying, ?I like exercising.? I want to punch people who say that in the face. But it?s nice being in shape for a movie, because they basically do it all for you. It?s like, ?Here?s your trainer. This is what you can eat.?

On adjusting to her life as a famous actress?

Her take on life in the public eye?

In some ways, it?s a hard life, but it?s a great professional life. I?m doing what I love, and then I get months and months of rest. I have a lot of money for a 21-year-old. I can?t stand it when actors complain.

What is your favourite pic? :)

2 exclusive outtakes from Alexei Hay photoshoot for Glamour US
Welcome to Jennifer Lawrence Online! JenniferLawrence.org is a fansite devoted to the actress Jennifer Lawrence. Here at Jennifer Lawrence Online you will find all the latest news, images, videos and information on Jennifer and her continued career. If you have any questions, concerns or donations please contact me and you will get full credit. Stick with us, look around, and enjoy your stay!