I remember when 2 days ago I was complaining about lack in new magazines with Jennifer on the cover, and look at this! Yesterday Vanity Fair revealed its The Hollywood Issue cover and now, we know that The Hunger Games trio and director, Gary Ross grace new cover of The Hollywood Reporter! I think I can say that the promotion of the movie has already started, can?t I? 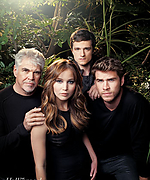 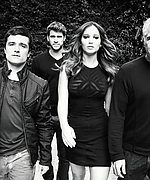 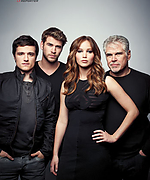 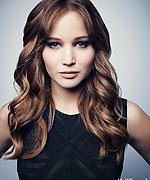 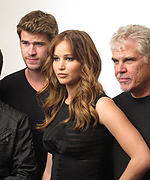 In the interview Jennifer talks how she prepared for her role, The Hunger Games trilogy author Suzanne Collins and how her life has changed. You can read the excerpts below:

The Hollywood Reporter: How did you prepare?

Jennifer Lawrence:I did a lot of running because that’s all she does — track running and free running — then hand-to-hand combat and yoga. We trained to be able to do every stunt in the movie, and the ones that didn’t work out, my stunt double would do. I trained about four hours a day. Trying to find what Katniss’ body should look like put a lot of pressure on my shoulders. And it was stressful because I didn’t want to disappoint anybody — there was a lot of pressure to get your body to a place where an entire franchise is based [on it].

Did you spend time with author Suzanne Collins?

I met her on set, and we also had a lot of very long conversations when I was still in England [visiting friends]. When we met, I asked her about how she had come up with the book. She said she was flipping between reality TV and the war in Iraq, flipping back and forth, and came up with the concept.

How has your life changed compared with a year ago?

It hasn’t really, I’m happy to say. I have my family, my friends, my dog — he’s a Yorkie, but he’s been taken by my parents because they just lost their dog — and I’m leaving the country a little. But I haven’t changed my personal life.

Jennifer on ‘Watch What Happens Live’