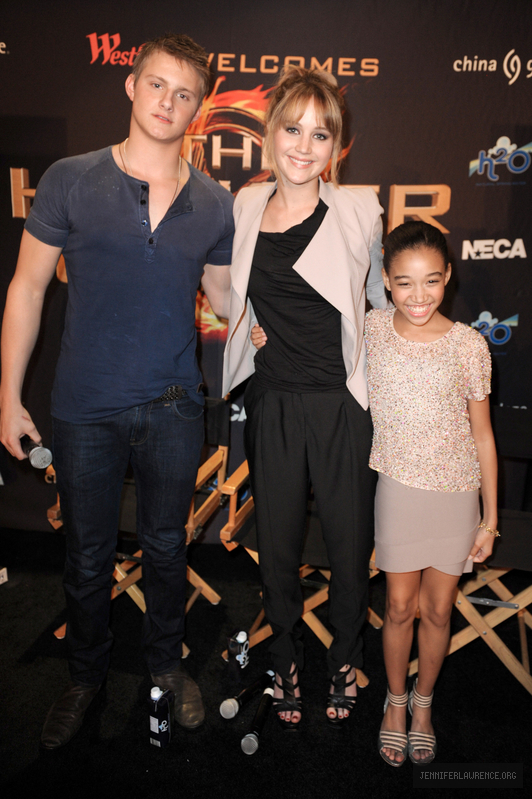 It seems that Jennifer Lawrence is also a hero in the real life! Just read what Amandla Stenberg (who plays Rue) said on her!… Awww, she’s amazing! Celebuzz.com: Jennifer Lawrence and Josh Hutcherson were both terrified of spiders on The Hunger Games set, but it was another insect that almost caused some serious trouble. While at THG junket, Amandla Stenberg (who plays Rue) told Celebuzz about an close encounter of the stinging kind that caused Jennifer to act like a real life Katniss.

?There were lots of bugs on set. This one time we were shooting a scene in a meadow and there was a hornets nest right by my head,? recalled Amandla. ?Someone stepped on it so all of the hornets started swarming us. I got stung four times in the face, then Jennifer came to the rescue.?

So what did Lawrence do?

?She ran over, picked me up and ran to the car, and was like ?Step on it!? So then we left. Then she went out and got me ice cream, Jello, cookies, brownies, and everything! I was like, ?Thanks so much Jen!? Then she goes, ?So can I have some???

Anyone else dying over this real Rue/Katniss moment? Rescuing aside, Amandla couldn?t have been more genuine in praising Jen, and she told us about how they formed a real big sister-little sister relationship.

?We became close during rehearsal. That?s when I first met her. We went out to dinner, and I spent a lot of time with her so that was great. She?s very funny, even during the death scene. Right when we were about to do the scene, she would crack a joke, and I couldn?t stop laughing. I was about to be dead, so that became an issue sometimes. She?s fantastic. She really became a mentor.?

Lionsgate may make four movies out of ‘The Hunger Games’ trilogy.