Interview: Jennifer Lawrence is ready to go where films, fame take her 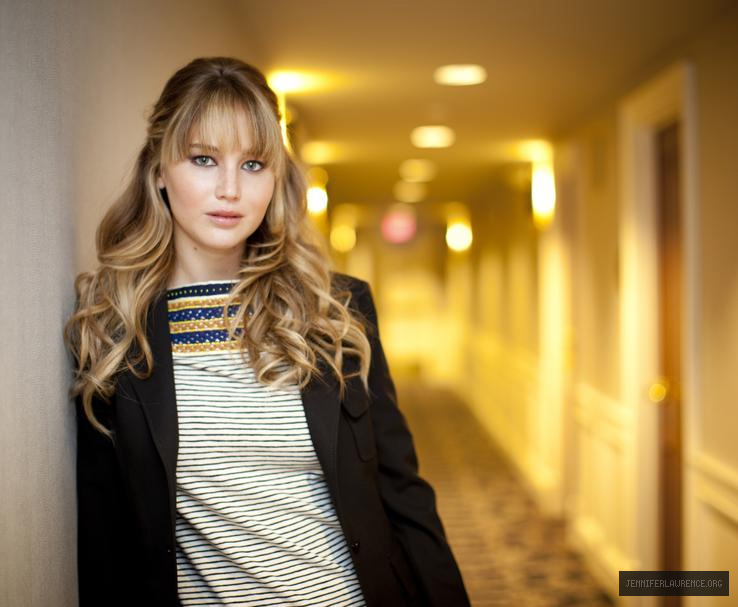 As it seems that Jennifer is everywhere these days, there is another interview with Jen where she recalls audition process for The Hunger Games, as well as she talks about making small, independent movies and in what way “The Hunger Games” is changing her life.

Did you think you would always be doing just small independent movies?
Yeah, I think that was why ?The Hunger Games? was so weird. I had planned my life. I?m really big on doing that. And it was much simpler. It was like doing small indies, then maybe direct and produce, then have a family and maybe move back to Kentucky. I never saw my career being bigger than my life. That was why I was a little taken aback by this.

How did you first get involved with ?The Hunger Games??
I read the books, on my own, and I loved them. Then I found out they were being made into a movie, and then I had a meeting with (writer-director) Gary Ross.

Did Gary ever tell you why he wanted you for the part?
Yeah, he told me. We?ve had that conversation before. But I get weird talking about it because I start imagining, ?what if the other girls who auditioned read it.? It feels like one of those private things.

Did you know right away that you got the part?
No. I knew that I had a great meeting with him, and we really hit it off. But that happens a lot, and then you never hear from the people again. Then I went into the audition, and everyone was so nice to me. But I?m so insecure that when people compliment me, I think, ?Oh, you?re just being nice, and then you won?t call.? I thought they were just softening the blow of not hiring me.

Since you?re a fan of the books, while you were making this movie, was it hard not to think about what the character becomes in the second and third ones?
That?s a funny thing, because we don?t know what?s going to happen to us or what we?ll become or grow into. So it was important to kind of leave that out of my mind. But she had to be scared, because she?s a 16-year-old girl fighting for her life, and she had to be vulnerable, because I never wanted anybody to feel that at any point during the games she couldn?t die. But at the same time, that strength of a budding warrior, of a Joan of Arc, had to be there.

Did knowing the books help you at all?
Filmmaking-wise, we had to throw that out. We took everything that we needed and that we loved from the books, and that was in the script. Then we had to focus on the script. We were making the script, not the books.

You said that you had planned your life. What does this film do to that plan?
It throws a huge wrench into it (laughs). But it was an incredible opportunity that I would have regretted every single day of my life if I had said no. I would have been telling my kids, ?Yeah, I passed on that.?

Did you actually think of saying no?
Yeah, because it was so big, and I love my life, and there?s not a lot of time in a person?s life where a yes or no decision can change your life forever, and it will never, no matter what, go back to the way it was before. That was terrifying to me. Even from a professional standpoint, I wanted to continue to make small passion projects that I love, where people could still lose themselves in my characters. Then I realized that saying no had to do with me being scared. I didn?t want to miss out on something just because I was scared.

Jennifer Lawrence on playing strong women, her survival skills and why she is afraid of fame

Scans magazine update: People, Seventeen & The Guardian + 1 photo from Tim Palen photo shoot
Welcome to Jennifer Lawrence Online! JenniferLawrence.org is a fansite devoted to the actress Jennifer Lawrence. Here at Jennifer Lawrence Online you will find all the latest news, images, videos and information on Jennifer and her continued career. If you have any questions, concerns or donations please contact me and you will get full credit. Stick with us, look around, and enjoy your stay!