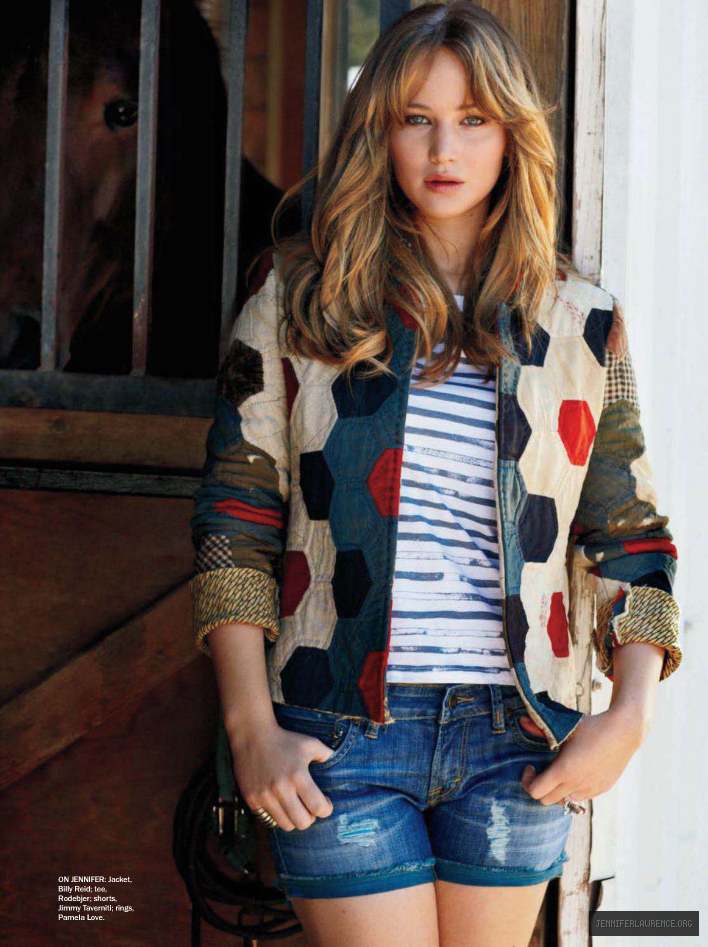 Read the following Moviefone interview with Jennifer Lawrence; Jen talks about what “The Hunger Games” means to her, what moment she can’t wait to replicate onscreen, and what she thinks about the “Twilight” movies.

When you read the books, did you imagine yourself playing Katniss?
No [laughs]. When I read them, it was before there was any talk of the movie or anything, so I definitely didn’t picture myself. That would be slightly narcissistic, anyway. By the time there were talks of the movie, I was so turned off by the idea — because we’ve watched so many people destroy our favorite books [by turning them into movies]. There was interest in me for it, so I had a meeting with Gary Ross, and just loved everything he was saying. I knew the movie was being made by people who are fans of the book and wanted to stay true to its story, and understood that it’s a sad story, not a cool action flick. There was hesitation, of course, over the size of it and what my life would be like if I were to say yes, but I slowly came around to the idea. I’m happy I did [laughs].

How did you overcome that hesitation about signing on. A lot of actors seem to bristle at the idea of leading these big franchises.
It was funny because I’ve always been asked why did I always do indies, why didn’t I do a big studio film. I always said, “Because it’s not about the size of the movie, it’s about the script.” When I was almost going to turn this down because it was too big, my mom told me I was being a hypocrite, because I loved the story, loved the characters and I truly believe in the message that these films are bringing. I really don’t feel like I’m being tied down to it — especially after filming the first one, where I had the time of my life. I actually can’t wait to go back. It’s a character I would love to revisit. I think if you sign on to the right franchise [you’re OK]. I don’t feel like a slave to anyone. I feel like I’m very passionate about this story and what it means about our world and about humanity. It’s something I want to talk about, I want people to see, and I’m proud to put my name to it.

OK, well: What does “The Hunger Games” say about humanity?
I took away that, over time, we’re just becoming so desensitized to death. Humanity is becoming dulled to itself. We can watch people die on TV; we can watch a snowboarder fall off a mountain and die. We watch it as entertainment. The world is obsessed with reality television, and in a world where history repeats itself, it’s plausible, really, that our world could get there.

Despite the fact that these books are nothing like “Twilight,” comparisons between the two franchises are often made in the media. Does that bother you?
I don’t really care! I mean, I get it: they’re all beloved books and they’re huge best-sellers, and they become a franchise. It’s easy to compare them. I think I’m more relaxed about it because once you see the movie you know it’s absolutely nothing like “Twilight,” or nothing like “Harry Potter,” except in size. I’m not worried about it. I like the “Twilight” movies.

Do you take anything away from the how the actors and actresses in “Twilight” and “Harry Potter” handle this kind of massive fame and attention?
I think everybody kind of handles it in their own way. I don’t compare myself to them because I still refuse to accept the fact that I might be recognized. If somebody recognizes me, I think it’s a freak accident. But who knows what’s going to happen? I could go off the deep end.

You’re a huge fan of the books. Was there anything cut out that you wish wasn’t?
There was not one thing that I wasn’t blown away by — that I just loved. I know that’s a typical interview answer, but really: what the Capitol looked like, what the train looked like, what an Avox looks like — they created this world that I couldn’t even imagine when I was reading the book. Anything that has changed is for the better — for making a better movie. I think that’s where people go wrong when they’re making books into movies. People are disappointed if there’s something missing, but you also have to think that you’re making a movie. It’s the perfect combination; everything that you want in there is in there, but it’s also just a great film.

Were you happy with how the extreme violence is handled for PG-13 audiences?
That was a fear of mine: I didn’t want them to dull the violence. That’s what makes the story what it is; it’s kids fighting to survive, and the only way to survive is by killing someone else. You don’t want to sugarcoat that. You can’t sugarcoat that, because then you lose what the story is all about.

Do you have a favorite book in the series?
My personal favorite was the third, because I feel like that’s where she became Joan of Arc. That’s where she really took up the responsibility of, “This is what I’ve created.” The revolution that started. She kind of became a warrior. So, I like that.

Even before that happens in the third book, Katniss is a very physical presence. Did you get to do your own stunts?
I did as much as I could, Actually, the studio was more open than I thought they would be. I think when we’re on the last movie — when they don’t need me anymore — I’ll probably be able to do all of my own stunts [laughs]. But I did a lot, actually — lots of harness work, lots of running. And I’m a weird runner. So, that was unfortunate.

So, we should look out for your awkward running.
Yes. My run is so weird. That’s what I’m most nervous about in this whole ordeal. I’m most nervous about everybody making fun of the way I run. I do, like, karate hands. Instead of running with my hands closed together like a normal person. It’s like I’m trying to be aerodynamic or something, so my hands are straight like razors. Karate hands.

Gary Ross says Jennifer Lawrence will help him give viewers the same ‘visceral experience’ as the books.