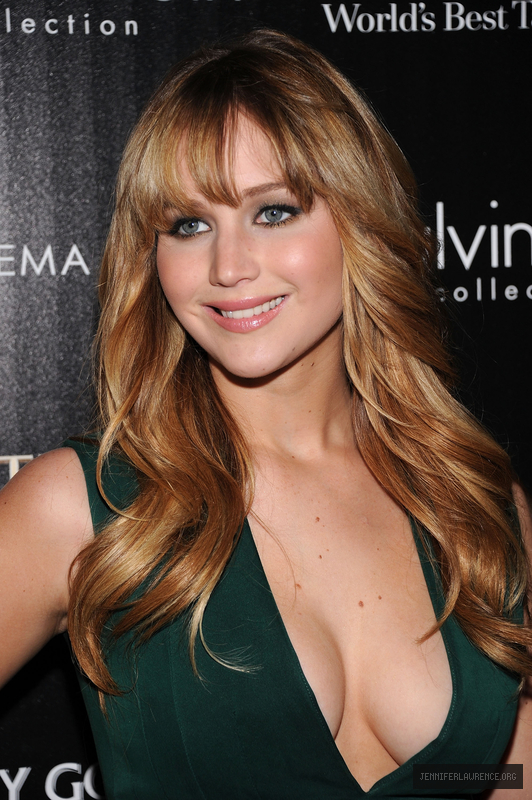 During the recent Los Angeles press junket, Collider.com talked to Jennifer Lawrence about The Silver Linings Playbook as well as shooting The Hunger Games and preparations for her role. Check out the following interview (audio here) to find out what her favourite movies, directors and karaoke songs are.

Do you have a favorite director, movie and actor?
I don?t have one that?s specific. I think Kubrick, obviously. I love Sofia Coppola. It?s tricky because I?ve worked with a lot of them, David O. Russell, Susanne Bier. Woody Allen, the Coen Bros.

Do you have a favorite movie?
That one?s tricky. I love Pan?s Labyrinth, I love Guillermo del Toro. Alejandro Gonz?lez I??rritu. I Heart Huckabees is definitely one of my favorite movies. It might be my favorite.

What is your go-to karaoke song?
I could never do karaoke, but if it were it would be [?Wind Beneath My Wings?].

When you signed up for this thing, obviously you knew there was gonna be a lot of fan interest. Did you call anyone on Twilight and say ?What am I getting myself into??
(laughs) No. The only time I?ve spoken to anyone from Twilight is, I just emailed with Kristen Stewart a few days ago because we?re in this really giant ?fight? all over the tabloids?it?s not real. We?ve never met or even spoken to each other, but apparently we?re in this gigantic feud because ?it?s my turn to take over as Hollywood?s glam girl, and she has to step over as the famous one,? and we?ve been fightin? like cats and dogs. So I basically just shot her this email, and she wrote back, ?Don?t worry about it, welcome to the world of bullshit,? basically. So that was the only time I?ve spoken to them. But saying ?yes? to the role, there was nobody really I could talk to because it was all kind of personal matters that I had to work out on my own. It was nothing that anybody could tell me, it was all just kind of ?Are you ready?? It was kind of personal things that I had to work with on myself.

What surprised you most about this process of making this big tentpole release and the promotion that goes with it?
That it feels like an indie. Preparing for the script and the filmmaking side of it was nothing like this. We made an amazing film; Gary made a war movie. Making it felt so un-tentpole, and even watching it I feel that way as well. I think it?s odd to kind of leave the set and leave the creative process that felt so organic and small in so many ways, and then all of a sudden to do this press tour and to find out that it?s so much bigger than it felt on set.

Something interesting about the film is that Gary chose to do a lot of close-ups. When you were filming, did he sort of let you know that that was gonna be the aesthetic of the film or was it kind of like ?Gary?s a great director, whatever he wants to do??
It was both. You caught on very quickly to his vision and what he wanted to do, and a lot of his ideas and his vision were what made me want to do the movie. Once he got a camera and once he started mapping out his shots and what he wanted to do, that?s when I realized he was making a war movie. It was amazing to see it just get better and better.

A lot of actors like two takes, the Clint Eastwood method, and some actors like a lot of takes like the David Fincher method. Where do you fall on that scale and what?s the most you?ve ever done?
I adapt to directors, I don?t like making directors adapt to me. If I?m with Clint Eastwood then I?ll do two takes, if I?m with Fincher I?ll do 50?though the thought of that sounds horrible. I think the most takes I?ve ever done would probably be maybe 10, on like a big studio movie where you can do those. But after a while it?s like, ?It?s not gonna get any better, this is what it is,? the light?s just gonna dull from your eyes. I think the more you do it, the less the actors listen to each other because then you start memorizing the other person?s lines and you start getting bored. There?s this freshness that happens within the first few takes of the actors actually listening to each other and actually really reacting. It kind of starts to dull after a few more takes, but then again you get a few more chances to get it right.

I?ve spoken to some actors that the minute they get a script and know that they?re gonna do the part, they start preparing, and some wanna wait until they get closer to the project to get into it. How are you when preparing for a role?
See I?ve never like had a system or a program, I always think that I don?t know how to act. I?ll adapt to any director because I don?t really have a set way that I do things. If a director hires me and says, ?I want you to get started right now and do this research, this research, this research and I want you to have every line memorized before you ever show up for the first day,? then that?s what I?ll do. If not, I normally just kind of read the script the first time before the meeting, the read that makes me say ?yes,? and then the next time is at the table read, and after that it?s just [memorizing] my lines the morning of hair and make-up, just kind of specifically.

I really enjoyed the movie and I?m very confident that it?s gonna be a huge hit. You?re obviously making another one, what is it like to know that you?re going back into this world in the not too distant future?
Exciting, which is weird because I remember signing on to it and think, ?Well I?ll probably have fun on the first one and be miserable for the others,? but really I?m excited to get back into training, I?m excited to get everybody back together, that was such a fun movie to shoot. And also, a time where an actor gets to do a character and a story that they really love and look up to and feel so strongly about, that happens maybe once in a lifetime maybe once every ten years, it doesn?t happen a lot and I get to do it once a year, and also with people that I love. I love Josh and Liam and Elizabeth, Lenny, Woody, to get back together with those guys it?s great.

Were there any scenes that you remember getting cut or anything you were sad to see go?
You know, I could say yes but they happened afterwards when I was in my car driving away from the screening and remembered what got cut out, and then I realized that if I didn?t notice when I was watching the movie, it shouldn?t have been in there. I never once went, ?Oh they cut that out, oh they changed that, they missed that.? It wasn?t until afterwards, and that means they did a good job; I didn?t notice it.

I definitely wanna ask you about The Silver Linings Playbook. For people who don?t know, could you talk about little bit about who you play, what it was like to make that project?
Yeah, Silver Linings Playbook was directed by David O. Russell, it?s with Bradley Cooper, Robert De Niro and Jacki Weaver, and it?s this kind of hilariously dark, sad story about this man, Bradley Cooper, who gets out of a mental institution and his wife has a restraining order against him and they?re divorced but he?s convinced and obsessed with getting her back. Then he meets me, and I?m an ex-sex addict and I agree to legally get letters to his ex-wife if he is my dance partner at a dance competition at the end of the month.

When you read it like that it?s a very interesting synopsis.
Yeah, it?s a David O. Russell synopsis (laughs).

Do more people want to talk to you about Monk, Cold Case, or Medium?
(laughs) Cold Case, but Monk actually has a better story. When I first got to California and started auditioning, this one Sunday we were at this church and I was in this youth group thing I guess where the younger kids go while the adults do their church. There were two characters in that episode, Emily J. and Emily C. I thought I was gonna be Emily C., that was my understanding because that?s who I auditioned for then I found out I got the part so I went, ?Cool, Emily C.? Somebody announces like, ?Oh I?m gonna be Emily J. in Monk,? and I was like, ?Oh my God, I?m gonna be Emily C.!? so everybody at church was like, ?Great, we can?t wait to see you guys!? It turns out I?m a mascot, I come in and I?m on the screen for three and a half seconds maybe, I have two lines and then I rumble away. I literally take my cat hat off, it?s the most humiliating [thing] and everybody?s like ?Oh Emily C.? so I never went back to church ever again (laughs).

What are the TV shows you?re watching right now?
Doomsday Preppers, Ancient Aliens, I mean Sex and the City always because I?m a girl. Intervention, Addicted, I Didn?t Know I Was Pregnant, My Teen Is a Nightmare I?m Moving Out, oh and Scare Tactics!