Jennifer Lawrence has recently talked to HotHits.com about being Team Peeta or Team Gale as well as how her life has changed after taking a part of Katniss in “The Hunger Games”. Click on the picture below to watch the interview!

“You mean out of them? See I’m so insecure that I was like, ‘Which one would say yes to me?’ I thought it was the other way round. Which one would feel bad enough to take me out to dinner?” she said. 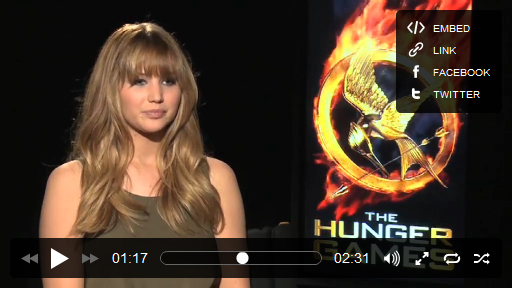 “When people follow me and hide in bushes and take pictures and then there are horrible pictures of me all over the internet that I didn’t know were being taken,” Jennifer said. “Well I assume they’re hiding in bushes, because they’re somewhere and I don’t see them… I can’t even believe that’s legal.”