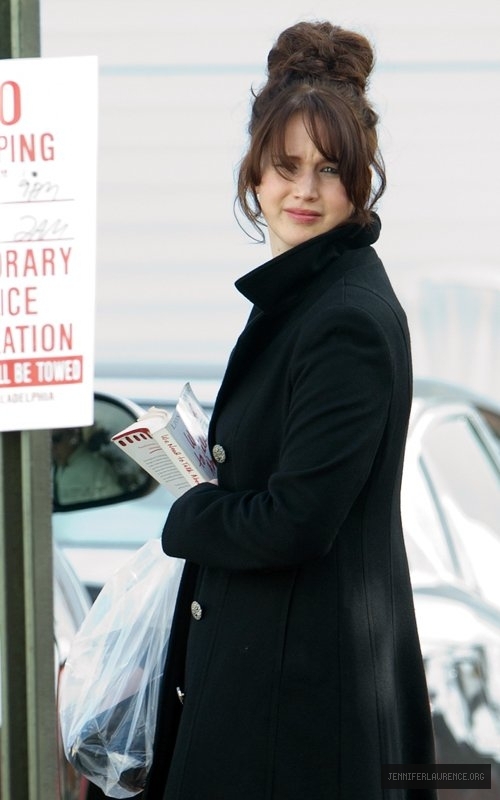 And that is something for Jennifer’s fans who are bookworms. CNN.com has recently published a list of 5 Jennifer’s favourite books. Have you ever wondered what are the favourite Jennifer Lawrence’s books? If you watch / read Jennifer’s interviews, you will probably know that she loves Anna Karenina by Leo Tolstoy and she is the biggest fan of Salinger’s novels. Check out the following list to find out what else she reads!

1. “The Other Boleyn Girl”
“Gregory is one of my favorite authors,” says Lawrence. “I’ve always loved history, and she makes it…salacious.”

Narrated by Anne Boleyn’s sister Mary — who managed to keep her head — Gregory’s best-seller takes a new look at the oft-told story of the loves of Henry VIII and the political and religious intrigues and rivalries that roiled not just life in the English court but the whole of Europe.

2. “Raise High the Roof Beam, Carpenters”
When she was 14, Lawrence traveled to New York City to start her career, so Salinger’s tales of the quintessential New York family — the brilliant, sophisticated, doomed Glasses — have a special place in her heart.

“I’m so drawn to Salinger’s view of society back then, and to his sarcasm. I read “Catcher in the Rye” first, then this one. I don’t think there’s ever been anything like these characters in American literature.”

3. “We Need to Talk About Kevin”
Shriver’s haunting novel is not quite horror and not quite thriller, “but it’s definitely dramatic,” Lawrence says.

A mother’s story of watching helplessly as her son grows from an angry child into a horrifically violent young man, the book won 2005’s Orange Prize for fiction and inspired the recent movie starring Tilda Swinton. “I wouldn’t read it if I had kids or if I were pregnant,” she warns.

4. “Anna Karenina”
Lawrence’s “Hunger Games” costar Donald Sutherland introduced her to the novel one day while the two of them were doing what actors do most on set — waiting. “We were talking about Walt Whitman and “Leaves of Grass”, and he mentioned this novel, which he gave me on his last day of shooting.”

The familiar story of Anna, who naively sacrifices her comfortable (and stifling) marriage for true love and finds herself cut off from everything she knows, was a surprise to Lawrence.

“I really wasn’t expecting to like it. I thought I wouldn’t want to finish an 800-page book, but then I started slowing down and reading the same chapters over and over. You fall in love with the characters; you grow up with them.”

5. “The Rum Diary”
“You can tell in one sentence if what you’re reading is by Thompson,” Lawrence says of the late journalist’s gonzo style.

Published in 1998, nearly 40 years after it was begun, this fictionalized memoir — released as a film with Johnny Depp in 2011 — contains all the Thompson trademarks: drunken excess; surreal, violent episodes; fascinating, often despicable characters.

“You read a Thompson book because of his voice. He’s always getting wrecked in San Juan and reporting on cockfights. He’s just hilarious.”