I’ve just found translated interview with Jennifer for German ‘Interview’ magazine. I really encourage you to read it although it is not her the most entertaining and the most interesting interview which she has ever made. Jennifer talked to Drew Barrymore about various things — living out of the suitcase, being a mom (if she wouldn’t have been an actress), how a guy should ask her out on a date, which painter (dead or alive) could paint her portrait and which male/female character she would like to be if she lived in a novel. As far as the translation is concerned, I can’t take any of the credit. For english version of the interview I would like to thank Alvedansen from thefashionspot.com! 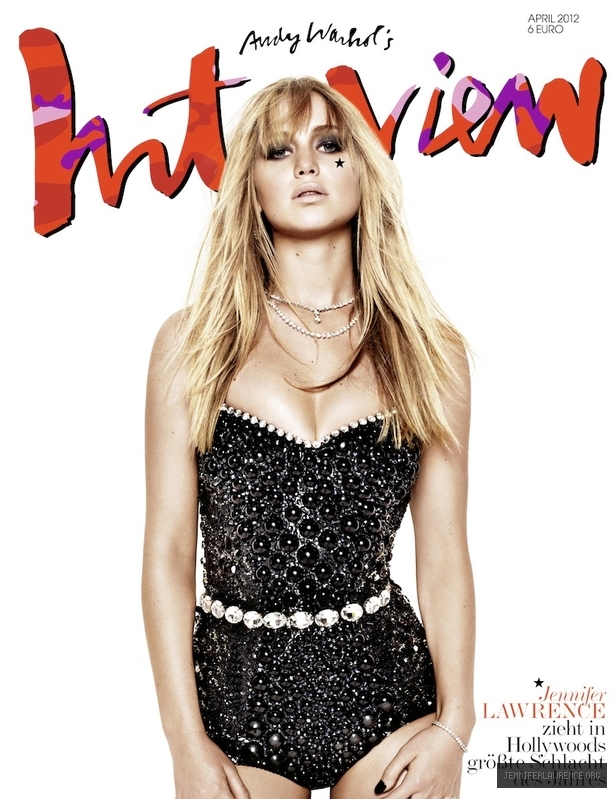 Drew Barrymore: I?ve just been in the vegetable garden, my hands are still dirty. How are you?
Jennifer Lawrence: I?m fine. I just drank three cups of coffee and am a bit jittery now.
DB: I know what you mean. I?ve switched to ice tea to reduce my caffeine intake.
JL: I?d die without coffee.
DB: I know, coffee helps to make the worst situations bearable. Where are you at the moment?
JL: In Minnesota, in my hotel room.
DB: I?m so excited that I get to interview you.
JL: I?m so glad that you were willing to do so. Jodie Foster interviewed me in my previous Interview spread, but that was for the American edition.
DB: I recently met her in a restaurant, my whole body was shaking. She?s amazing. I?ve admired her my entire life?
JL: ?and then you meet her and she is so normal. And wonderful. And nice. As if she didn?t even know that she?s our idol.
DB: I always like that the best. There is nothing worse than meeting one of your heroes and then be disappointed by them.
JL: I know. I?ve just met John Stamos, you know, the uncle of the Olsens? in Full House. I had a little breakdown because I was so excited. He was so charming ? if he hadn?t been charming, I would have never recovered from that. It would have ruined my life. Can you imagine: you meet Uncle Jesse and he ISN?T nice?