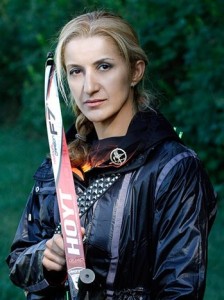 As you probably know, taught Jennifer Lawrence how to shoot with a recurve bow for the 2012 film “The Hunger Games”. Few days ago Fitness Magazine interviewed Lorig about being an Olympic archer and training actress for “The Hunger Games”.

How does it feel to be competing in your fifth Olympic Games? What does training look like leading up to the competition?
It feels great! Typically, we train from 8 a.m. to 6 p.m. with an hour for lunch. Since we?re getting to the last minute, we do about four hours a day now.

What qualities make for a medal-worthy archer?
You need a very strong upper body. Women usually use bows that weigh 43 or 44 pounds, while men use 49-pound or heavier bows. I use one that weighs 47 pounds.

Wow, that sounds intense to be lifting that during all of your training and competitions! Do you cross train to build strength and stay in shape?
Any free weight exercises for shoulders and arms are great, but I like to make sure I work my legs and heart too. I lift for about an hour, then finish with two or three miles of running. And of course a soak in the jacuzzi!

You trained Jennifer Lawrence for her role as Katniss in The Hunger Games film. Were you a fan of the series prior to getting the job?
No, Jennifer told me about the books when I met her. Then I finished them in three or four days! I didn?t know much about Jennifer either?shame on me! Three days in to our 15-day training, I Googled her name. The next day I came in and said, “OMG. You are a movie star!” She said, “Are you kidding me? You?re a four-time Olympian!”

Were you surprised by Jennifer?s abilities? And do you think the archery in the film seemed legitimate?
She was very motivated and technically very good. I do think it looked good in the film. You can absolutely shoot apples from 80 to 100 yards out [like Jennifer’s character did].

The Catching Fire movie is coming up. Have you been contacted about helping with that as well?
I haven?t been asked, but would jump at the chance if it came up!

Lately, there have been a lot of movies with characters that tote a bow and arrow (Hawkeye in The Avengers, Merida in Brave, Katniss in The Hunger Games). If you could have any of these characters as teammates in London, which would you choose?
Probably Katniss!

‘The Hunger Games: Catching Fire’ begins shooting in Georgia, before moving to Hawaii

What scene from ‘The Hunger Games’ is Jennifer Lawrence most excited to shoot?