Finally we can officially say that Jennifer Lawrence graces the cover of October’s W magazine! She looks absolutely stunning! I don’t know what to say more, she looks like a piece of art! Look at the cover – she brings to mind a black swan, doesn’t she? ;-) Anyway, these beautiful photos were taken by Tim Walker, and Jacob T was the stylist. Which gown worn by Jennifer do you like the most? Prabal Gurung ostrich feather and sequin-embroidered see-through tulle gown, Alexander McQueen nude ostrich feather dress, Alberta Ferretti black chiffon and ostrich feather top and tulle gown, Vivienne Westwood Gold Label blue-gray ostrich feather and silk dress or Calvin Klein black dress from the cover? 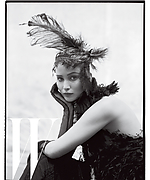 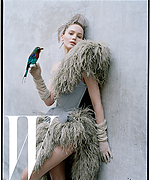 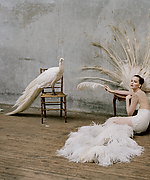 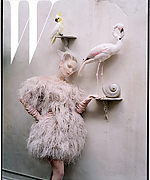 I’ve just added to our photo gallery Tim Walker’s photo shoot so check it out! Have you read the interview yet? If you haven’t read it below. :-) For more visit WMagazine.com.

Jennifer Lawrence is ready for the role of a lifetime: that of the next great American film star.

Jennifer Lawrence is only 22, but she has already been nominated for a best actress Academy Award, for Winter?s Bone, and starred in two blockbuster franchises. She was nude and blue as Mystique in X-Men: First Class, and in The Hunger Games she played Katniss Everdeen, the ultimate heroine for a dystopic age. In November, she stars in Silver Linings Playbook, a romantic comedy about emotionally damaged people.

You play a rather crazy widow in Silver Linings. Technically, you are too young to play that character. Did you have to audition?
I did. But I didn?t mind. People always worry that I?m wrong for the part: I?m usually too young?or, in the case of Katniss, they thought I was too old. I was blonde, and Katniss is brunette. So many problems. There were a lot of things that we just brushed under the rug.

The climax in Silver Linings is a big dance scene with Bradley Cooper, who plays your would-be boyfriend. Could you dance before this movie?
I?m such a bad dancer [laughs]. I don?t have many talents: I?m not a good cook, I can?t clean, and I can?t sew. The only thing I can do well is shoot bow and arrow?which I learned to do for The Hunger Games and will probably never come in handy?and act. Imagine me 100 years ago: I would have been pointless.

You could have acted! Although there weren?t movies like X-Men back then. Did you have to get naked and blue for the X-Men audition?
Not for the audition, but there was a moment where I thought I was going to have to paint my face and Skype with the director, and I said no. The first test where they painted me blue took around eight hours of makeup. I would stand, lean, or sit on a bicycle seat naked while they painted me. I have no modesty left after X-Men? I had blue in places I didn?t even know existed. Afterward, I had to go around naked, with scales over my private parts, surrounded by men. That cures you of all inhibition.

Did you end up hating blue?
Not really, but I did leave the color everywhere. The hotel in London wouldn?t give me my security deposit back because I turned their tub blue. I also did that to a lot of toilet seats on set. We called it ?getting Mystiqued.?

After filming X-Men, you went straight into Oscar madness. Did you have fun at the Academy Awards?
It?s an honor and an overwhelming compliment, but it?s also a kind of bizarre thing. All of a sudden you?re at these parties and everybody?s famous, and you feel like a loser. By the time of the actual Oscars, I was so sick of fittings and trains and corsets and people asking ?What are you going to wear?? I had to go on a diet, because at all the parties there?s champagne and hors d?oeuvres. I ate so much! I think I wore two Spanx on the night of the awards.

When you were at the Oscars, did you already know you were about to star in Hunger Games?
My mom talked about Hunger Games on the red carpet at the Academy Awards, which was something I had told her a million times not to do. She?s like Dina Lohan!?but she has good taste.

As soon as you got the part of Katniss, you began training. I read somewhere that you are so good with a bow and arrow that you could compete in archery at the Olympics.
I do love archery. I could kill someone with a bow and arrow if they?d hold still! With Hunger Games, I got really nervous about signing on to that huge franchise. I was afraid that Katniss would overwhelm any other character I?d try to do. But I love Katniss, and she didn?t take over as much of my life as I thought she would.

Tiffany in Silver Linings is very different from Katniss. She?s challenging and initially off-putting. Do you have to like a character to play her?
No. I don?t have to like them? a lot of people don?t like themselves. It?s nice not to be likable for the audience. It?s freeing to not have to get an audience on your side.

You started so young?you came to L.A. when you were only 15. One of your first movies was The Poker House, and your character in the film is raped. Was that traumatizing?
No. I hid the Poker House script from my parents so that I could audition for it. By the time I got the part, it was too late: They had to let me do it. During the filming of the rape scene, my mom was there. I was okay with it. I was very ballsy at that age?the typical kind of stubbornness that comes with being a teenager. I started out fearless, and now I?m terrified.

That is not true.
It is, and it isn?t: You do become more aware of your mortality as you get older. When you?re little, you jump on any wild horse. Then you get a little bit older and realize how fragile life is, and you?re more careful.

You sound so old. You?re 22!
I?ve been through a lot. I mean, I?ve been nude and painted blue! [Laughs] Truthfully, a lot has happened in a short time.

Have your feelings about the movie business and Los Angeles changed?
Sadly, I cannot live in Los Angeles anymore. I don?t understand how actors can do it. You have no life here. You are followed everywhere. It?s not like that anywhere else in the world. I don?t want to stay in L.A. and start thinking that?s reality?because it?s very far from normal. But I still love movies. I?m just going to love being in them from Kentucky, or Prague, or somewhere else.

Book launch of ‘Tim Palen: Photographs From The Hunger Games’