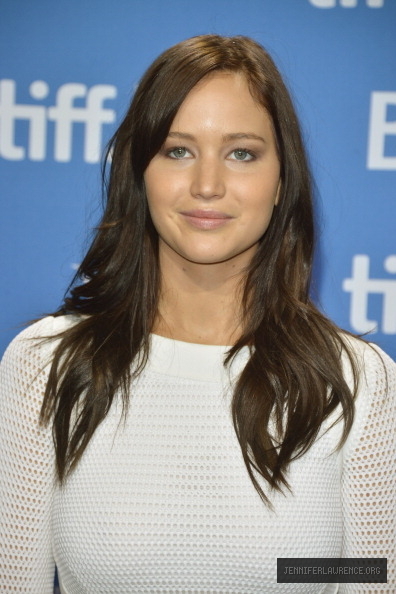 What was it like to work with someone of Robert De Niro’s status?

It’s nerve-wracking, and you’re well aware that no 21-year-old should be working with Robert De Niro — that’s just an insane concept. Then I met him, and he’s so nice and friendly, such a giving actor and he gives it all. He’s just a great guy. But there was never one moment when I forgot that he was Robert De Niro.

You were only 14 when you tackled acting in earnest. How did you know so young what you wanted?

It was weird. I just knew it was what I was made for, what I needed, what I wanted and what I was meant to do with my life. And I didn’t want to let it go … I’m so lucky. People are always asking me if I’m pinching myself because of the success of the Hunger Games, but honestly, my friends my age are just now coming out of college and they’re not sure what they want to do, and I’ve been blessed to simply know what I want to do for so long.

Has it been difficult to handle success — so much, so fast?

It hasn’t been for me. I don’t know what I’m waiting for. Everyone made it seem like, when it happens, everything his going to change, and you meet famous people and obviously, they act differently, but that’s because people treat them differently. And I would meet them and I used to wonder, ‘Is that what I’m going to end up like?’ But nothing has actually changed for me.

Well, now I get followed by paparazzi, but I just change cars with my friends so they don’t follow me, or now I’m looking at houses, because I love my condo, but it doesn’t have a gate so I have to look into moving. It’s just technical things like that. I have all the same people around me. I don’t like having B.S. people around me.

Did the Hunger Games mean a change in the roles you’ve been offered?

I didn’t really have any career expectations. I know that seems weird, but I’ve always been incredibly lucky, in that, the one script I read, that I fall in love with and I’m like, ‘I have to make this movie!’ or ‘I have to work with this director!’ — I’ve done it.

So that was such a rare, incredibly lucky thing that’s happened to me, that I wasn’t pining after these imaginary roles that I thought Hunger Games would satisfy. It was actually the opposite — I was afraid this one character would overpower the rest of my characters. But I genuinely liked the books and the movie and that character, and I wouldn’t be embarrassed to be known as that character for the rest of my life. Well, obviously, not only that character.