Telegraph.co.uk Interview: ‘I do worry that I?m too in your face’ 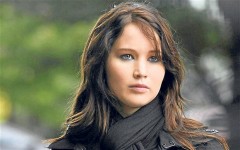 After the huge success of The Hunger Games, Jennifer Lawrence is learning how to cope as a superstar, she tells Will Lawrence ahead of the release of her new film Silver Linings Playbook.

Jennifer Lawrence has a theory about celebrity relationships. The 22-year-old star of The Hunger Games is in a relationship with English actor Nicholas Hoult (they met on the set of the 2011 blockbuster X-Men: First Class), and Lawrence has remained tight-lipped on the subject ? until recently at least.

?You don?t want your relationship to be in the press,? says the American actress, ?but at the same time, and this is only a theory, the more you try and keep it secret, the more the media tries to crack it open. ?Maybe there?s less pressure if you admit you are dating. Admitting that is just an experiment. I?m going to see how it goes.?

The relationship itself is going well, although Lawrence concedes that the phenomenal success of last March?s The Hunger Games has made the couple?s time in Los Angeles intolerable.
?My life in LA has changed a lot,? she says. ?I had to move out of my condo, which is infested with paparazzi, and I am still paying off my Volkswagen, which they know about and follow.?

Hence she and Hoult (About A Boy, A Single Man) prefer spending time on the East Coast, or in the UK. ?In New York it?s not too bad and in London it?s not terrible. London?s my favourite place to be. In fact,? she laughs, ?over here I?m like, ‘What do I have to do to get papped???

Media interest had been simmering since 2008?s The Burning Plain, which earned Lawrence a newcomer?s award at the Venice Film Festival, and it really heated up when she scooped an Oscar nomination for the 2010 drama Winter?s Bone. In the following year she appeared in the Sundance Film Festival favourite Like Crazy, as well as The Beaver alongside Jodie Foster.

It was with her starring role as Katniss in the adaptation of the first book in Suzanne Collins?s bestselling trilogy The Hunger Games that interest in Lawrence really reached boiling point.
The film, which is set in a post-apocalyptic world where children battle to the death in a gladiatorial contest, gobbled up almost $700 million at the international box office, the largest-ever return for a female-led action movie.

?You can prepare for it in certain ways,? she says of her sudden rise to superstardom. ?I know if I don?t want to get followed I have to take a different car and I?ve learnt not to leave pictures on the internet.

?But I do worry that I?m too in your face because of the movie. There are posters of me everywhere and when I see posters of other people everywhere I think they?re annoying, no matter what they?re like personally or professionally. So I worry that I might start p—— people off.?
Lawrence is locked into the franchise and must take that chance. She is currently midway through filming the second instalment, Catching Fire, with the new director Francis Lawrence.
?It?s great to return,? she beams. ?It feels like being a sophomore in high school because normally the first day at work is like the first day at school and you don?t know if you are going to make friends. On this movie I know that I adore everyone.?

What does worry her, though, even more than her own ubiquity is Katniss?s popularity. ?My biggest concern in taking on this franchise was that people wouldn?t be able to lose themselves in my other films ? that they would only see Katniss.?

Lawrence was one of the actresses to lose out to Kristen Stewart during the casting of Twilight, and she has paid attention to her one-time rival?s subsequent career.

?Bradley gets released from a mental institution, after he was sentenced for almost killing a man who was having an affair with his wife, and then he meets me, a recovering sex addict, and the two of us form a very explosive love story,? she explains. ?Well, not quite a love story, but almost.?
She is a devoted fan of the film?s director ? ?I love David O Russell and saw I Heart Huckerbees 11 times in one week? ? and was excited by the prospect of working with Robert De Niro, who plays Cooper?s father. In one memorable scene, Lawrence goes toe-to-toe with the legend, unleashing a forceful monologue right in his face.

?I was obviously very aware that it was De Niro,? she recalls, ?but I wasn?t necessarily nervous. I think he has a lot to do with that ? he is a very nice, normal and warm person.?
Lawrence?s confidence can be traced back to her childhood, growing up alongside two older, sports-mad brothers on a Kentucky horse farm. Her first break in the business came when she was spotted in New York?s Union Square.

?I was offered a number of modelling contracts soon after but turned them down. I was like, ‘Actually, I think I?m going to be an actor.? That was an incredibly dumb thing to do at 14 but was probably the one time when my self-assuredness paid off.?
Her latest movie put her confidence to the test, however. For all her many talents ? she can skin a squirrel and string a bow, courtesy of Winter?s Bone and The Hunger Games ? Lawrence says that she is a terrible dancer. Which is unfortunate, as in Silver Linings Playbook Lawrence?s and Cooper?s characters enter a dance competition.

?During rehearsals Bradley was brilliant and I was just awful,? she says. ?I was more like someone?s dad dancing. It must have been very painful for him.?

Soon afterwards, though, Cooper signed on to play the male lead in the Depression-era drama Serena, which will be the pair?s second movie together.

?We get on really well. Professionally it is like finding your co-star soulmate,? Lawrence says of Cooper, before adding with a laugh, ?although I bet if I said, ‘Hey, Bradley, want to do a dance movie with me?? he?d run for the hills.?