One month to go until the end of 2012, so GQ made a list to sum up these 12 months in culture. We can find there The Avengers on the top of The Box-Office, Game Of Thrones as one of the best tv series and in the other hand – twitter hashtags like #yolo and Adam Levine’s acting debut in American Horror Story. But, what’s the most important thing the list starts with Jennifer Lawrence! 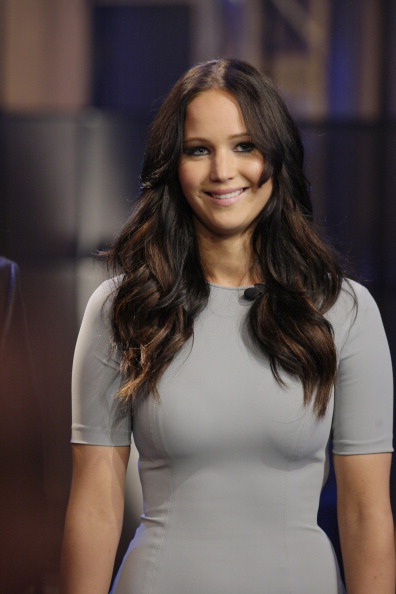 Here’s what they said about our Jen:

Maybe she knocked you out as a hard-bitten Ozarks teen in Winter’s Bone back in 2010. Or maybe your first “wow” was when you kept staring at the soulful?and shape-shiftingly shapely?chick playing Mystique in 2011’s X-Men: First Class. Nevertheless, odds are that 22-year-old Jennifer Lawrence only started lighting up your radar for real this year.

Back in March, she was a wistful but indomitable Katniss in The Hunger Games. This fall she’s starring as Bradley Cooper’s sexy, saucy love interest in Silver Linings Playbook, which exited the Toronto film festival in September with a barrelful of momentum to wind up as this year’s heart-warmer Oscar fave. Already, though, some of us besotted Jennifer Lawrence fans are wondering when she’ll be in a movie that’s truly worthy of her.

The thing is, no matter how many glowing reviews the damn thing gets, Silver Linings Playbook is basically an Adam Sandler movie gussied up to look classy by Adam Sandler’s absence and turned into a must-see primarily by Jennifer Lawrence’s presence. Done in most by its PG-13 obligation to stay tame, meanwhile, The Hunger Games didn’t completely deserve the credibility she brought to it. Even Winter’s Bone?her best showcase so far?could easily have played like cheap and squalid Southern Gothic if it weren’t for the Jennifer Lawrence Effect.

The Jennifer Lawrence Effect, you see, is a kind of total naturalness that gives whatever realm she’s been parked in an unearned jolt of organic reality. Resilient, wounded, or giddy, she’s always so vividly, physically there that a Jennifer Lawrence movie in 3-D would be redundant. No matter whom she’s playing?going back to a 2008 obscurity called The Poker House, which won her the best-actress prize from a dazzled Los Angeles Film Festival jury when she was all of 17?you’re not just convinced she is that person. She makes you believe she has been that person her whole life. And then she makes you wish you’d known that person all of yours.

If she also makes you worry you’d abandon your significant other for a brief chance to spend quality time with her big toe, that’s not Lawrence’s fault. She can’t help how she looks: that dialogue between lips and cheekbones that could make New Orleans jealous of Montana, those eyes Edgar Allan Poe could drown in. She can’t help it that the way she moves on-camera makes you wonder why the rest of us need words to help communicate our thoughts. She can’t help it that her refusal to stay a victim even when the script dictates otherwise is Zelda Fitzgerald’s revenge on Scott. Yet what defines the twenty-first-century side of her erotic appeal is that you know she’d kick the ass of anybody who crossed her. Reluctantly, sure?even mournfully, maybe?but still.

Because the Jennifer Lawrence Effect doesn’t announce itself as remarkable?that would go against everything she, um, embodies?some numskulls might think that what she does shouldn’t be called acting at all. But in our book, she makes most actresses her age look as fussy as cuckoo clocks. They want you to see that they know what time it is. But Lawrence’s face can tell you all about eternity. ? Tom Carson

To find out more go here!

Jennifer Lawrence named one of PEOPLE’s Best Dressed of 2012