Here’s the newest interview with Jennifer Lawrence made by Los Angeles Times in which Jennifer talked to Glenn Whipp about, among other things, the influence she has on young women as well as Tiffany — her character in Silver Linings Playbook. Jen also recalled the moment when her father has seen ‘Silver Linings…’ for the first time and revealed that she is thankful for everything her family has done for her. One beautiful picture taken by Kirk McCoy has been added to the photo gallery, don’t forget to check it out. To make story short, read the interview! 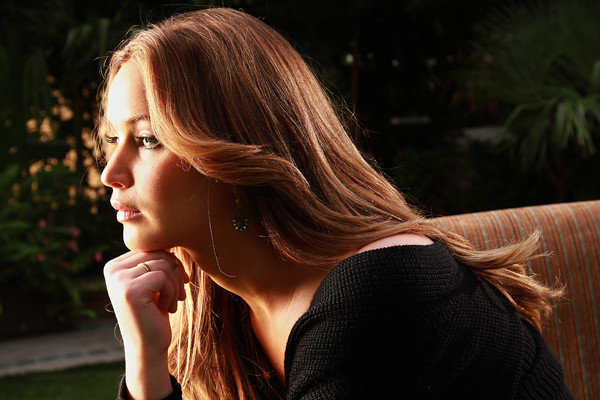 Jennifer Lawrence, comfortable in her skin

Jennifer Lawrence slides into a booth at the casually elegant Culina restaurant at the Four Seasons Hotel. She’s on a lunch break from the daylong grind of promoting the international release of “Silver Linings Playbook,” but she’s not eating because she just shared a “brick” of homemade lasagna that a journalist gave her during her last interview. Lawrence does accept the focaccia bread and olive oil a waiter offers and politely declines another offering once she’s finished.

“If I’m going to wear this skirt,” Lawrence says, laughing, pointing to the mid-length white number she’s sporting, “I can’t fit another thing into my gut.” When the waiter touts the lightness of the bread, Lawrence interjects. “It’s not a weight issue. Trust me. I’m barely fitting into my outfit!”

She then turns to her lunch companion. “So, I’ve had the lasagna,” she says playfully. “What did you bring me?”

There’s a refreshing lack of pretense with Lawrence, evident from the moment you meet her and she confesses that her iPhone bullies her, its Siri app calling her “Meredith” whenever she asks it a question. But that’s trivial compared to the disdain that the 22-year-old Kentucky native, who just received her second lead actress Oscar nomination with her turn in “Silver Linings,” feels toward the sense of entitlement that runs rampant in the movie industry. She’s also acutely aware of the influence she has on young women, particularly now that she’s playing the strong, self-possessed heroine Katniss Everdeen in the movies adapted from Suzanne Collins’ young adult trilogy that began with “The Hunger Games.”

“I was a teenager too ? hard to believe, right? ? and remember reading magazines and tabloids,” Lawrence says. “I don’t think the media realizes how much they glorify anorexia. You have an actress who loses a bunch of weight for a role and she’s explaining how she lost it. ‘I ate one grape a day and I lost 25 pounds and I was dangerously underweight and now I get awards.'”

Thanks to Katniss-Peeta.com I’ve added more Kirk McKoy pictures to the photo gallery, so go there to view them. :-)

Livestream for “The Hunger Games” red carpet premiere in Berlin

Jennifer Lawrence graces the cover of this month?s issue of Italian magazine ?Gioia?

New candid photos: Jennifer Lawrence out & about in West Hollywood