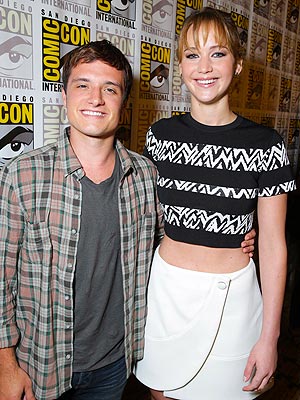 Jennifer Lawrence?and?Josh Hutcherson talked with People reporters??durring Comic-Con on Saturday.?The stars of Catching Fire, which will hit theaters in November, told that they had as much fun filming?Catching Fire?as fans are sure to have watching it.

“We had a few great parties in Hawaii,” Hutcherson said on the red carpet at the ‘Catching Fire’?event at Comic Con. “We were filming some stuff down there … and I had a house there. It was right on the beach, and we got to have all the cast come over and we just had giant swimming pool, barbecue parties and that was a lot of fun. It was a hard shoot. We were shooting long days and it was very physical, so we definitely needed to let loose and have a good time and we did that for sure.”?

?”Yeah, we had some good parties. They were so weird,” Lawrence said. “Woody Harrelson in a cropped top was my favorite. He got really hot and wanted to borrow a shirt of mine because he wore a thermal and the only thing he could fit in was a baggy crop top. And the best part is nobody mentioned it! The whole party, like nobody said anything. They’re just like, ‘Yeah, Woody’s in a crop top.’ That was great.”?