Jennifer Lawrence is The World’s Highest-Paid Actress of 2015 according to Forbes. Their international list measures money earned from June 1, 2014 to June 1, 2015 before subtracting management fees and taxes; figures are based on data from Nielsen, Box Office Mojo and IMDB, as well as interviews with agents, managers and lawyers. 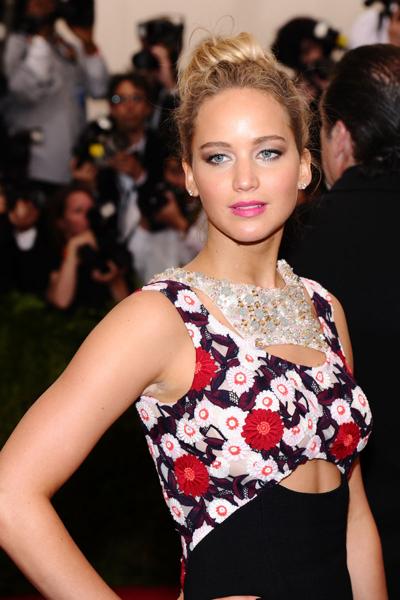 $52 million
Jennifer Lawrence earns more than any other actress thanks to her signature role as Katniss Everdeen in The Hunger Games trilogy. Those films proved Lawrence’s box office brawn as a female action hero and helped her negotiate a very favorable share of the more recent films’ profits. Outside Panem, Lawrence is reuniting with her Silver Linings Playbook costar, Bradley Cooper, for the comedic drama Joy. Lawrence supplements her silver screen income with a lucrative Dior contract.

ACTRESS, X-MAN, TRIBUTE
From:?USA
Previous form:?First Class Mystique, Oscar winner and the face of The Hunger Games.
The Buzz:?Quite simply the hottest performer on the planet right now. After breaking out with the non-genre Winter?s Bone, Lawrence?s Mystique was one of the standouts in X-Men: First Class, and she went on to own Panem as the heroic Katniss Everdeen in The Hunger Games. She?s since bagged herself an Oscar for Silver Linings Playbook, is a witty, self-deprecating breath of fresh air in interviews, and only turns 23 this month. With X-Men and Hunger Games follow-ups on the way, Lawrence?s star is only going to get bigger.

Jennifer Lawrence: With $26 million in earnings in the past year, the 22-year-old actress is the second highest paid actress in Hollywood. She won an Oscar for Best Actress for “Silver?Linings Playbook” in 2012 and her other film, “The Hunger Games” did well at the box office. She has been signed for “Catching Fire”, the sequel to “Hunger Games” series.

Jennifer Lawrence as Katnis Everdeen was rated as?one of the top Teen Movie Heroines according to TIME. You can read below, what they said about her:

You?d think the Team Edward vs. Team Jacob debate would have given way to Team Bella vs. Team Katniss. After all, the?Twilight?heroine has now been supplanted in the popular imagination of young readers and moviegoers by the forest gladiator of Suzanne Collins? trilogy. It?s probably not a fair comparison. Still, Lawrence?s dynamic warrior seems to have a built-in edge over Kristen Stewart?s passive, curiously blank vampire bride.

Katniss is not only a skilled fighter, but she?s also a canny manipulator ? of potential beau Peeta, of the bread-and-circuses media, and even of the politicians of Panem. She?s selfless and compassionate, whether she?s taking her kid sister?s place as a draftee or mercy-killing a wounded opponent. Still, she?s only 16 and doesn?t yet know her own heart, which makes her flawed enough to be relatable.

Where did Lawrence get the steely resolve needed to play her? (Her Oscar-nominated performance as a teen protecting her rural family from scary meth dealers in?Winter?s Bone?offers a clue.) Her Katniss may display a hint of liquid-eyed guilt or remorse at having to take an enemy down, but she?ll still do it, quick as an arrow.

Jennifer Lawrence could charm audiences while wearing a plastic bag. Fortunately, the 22-year-old has yet to resort to such extremes, instead wearing waist-defining dresses, strapless gowns, and Christian Dior Couture, where she serves as a spokesmodel.