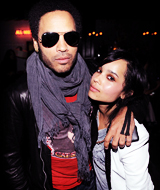 CNN has done an interview with Lenny Kravitz, Jennifer’s co-star in upcoming The Hunger Games movie. During the interview, Kravitz talks about Cinna – the character he plays, novel written by Suzanne Collins and Jennifer Lawrence. Read what he said on Jen :)

CNN: Have you met Jennifer Lawrence?
Kravitz: Yes, I know her actually because she did ?X-Men: First Class? with my daughter, [Zo? Kravitz], so she spent a lot of time in my house in Paris when they were filming in London. That was another thing about casting me: [Ross] said, I heard that Jennifer was in your house all summer and that you were taking care of the kids and they were cooking. I had the whole cast, like six, seven kids in my house on the movie so I got to know all of them before I had even seen them in action. So Jennifer and I ended up becoming friendly. She?s really sweet. And then I saw her in ?Winter?s Bone? and I was like, ?Oh, wow. This girl is for real.?

X-Men: First Class Blu-ray release date and cover art.
Welcome to Jennifer Lawrence Online! JenniferLawrence.org is a fansite devoted to the actress Jennifer Lawrence. Here at Jennifer Lawrence Online you will find all the latest news, images, videos and information on Jennifer and her continued career. If you have any questions, concerns or donations please contact me and you will get full credit. Stick with us, look around, and enjoy your stay!