As you can see on the following thumbnail, Jennifer graces the cover of Sky Delta magazine (March 2012 issue) wearing beautiful silk longsleeve dress designed by Miu Miu. Thanks to Jessica, the cover has been already added to the photo gallery! FYI: The photo used on the cover comes from Elle magazine photo shoot taken by Daniel King. 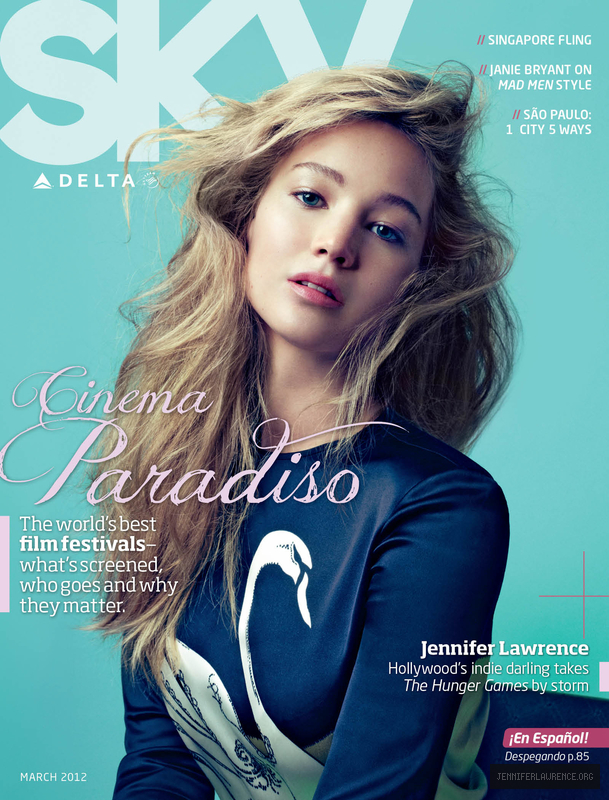 On doing interviews: ?Yeah, it?s kind of like going to a dinner party and then the whole night everybody only talks to you,? she says. ?And midway through, you?re like, ?Oh, my god, I?m so sick of talking to myself and hearing myself talk.? Nobody is supposed to talk about themselves this much. You just get bored hearing your own voice. And then you assume that other people are getting bored hearing you.?

On being more comfortable in a man?s world: ?There?s sort of a no-bull**** approach with men,? she says. ?I like life a lot better that way. I would prefer somebody calling me a b**** and punching me in the face than to whisper it behind my back.?

On what she was wearing: ?I can look,? she says, before awkwardly grabbing the back of her collar and wrenching it toward her face. ?Oh, see, they?re not that smart?they didn?t even put a label on here. I don?t know. It?s black.?

For full article visit Delta Mag. By the way, the last days are simply insane, aren’t they? There are + 5 news per day and it’s hard to manage to post that all, but… I don’t complain! :) Is it the tip of the iceberg? I think so (I hope at least :)).