Hello everyone! Finally, we have news of Jennifer Lawrence, she made ??the cover of Vanity Fair magazine for the month of November. The photoshoot was done by Patrick Demarchelier. Find below the first pictures from the magazine, a video slide and an article in the scandal stolen photos. 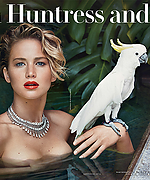 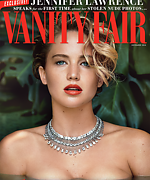 The 24-year-old actress had not previously commented on the incident, but she spoke to Kashner at length about the anger she felt. ?Just because I?m a public figure, just because I?m an actress, does not mean that I asked for this,? she says. ?It does not mean that it comes with the territory. It?s my body, and it should be my choice, and the fact that it is not my choice is absolutely disgusting. I can?t believe that we even live in that kind of world. ?

Lawrence also addresses the legal ramifications of the hack. ?It is not a scandal. It is a sex crime,? she tells Kashner. ?It is a sexual violation. It?s disgusting. The law needs to be changed, and we need to change. That?s why these Web sites are responsible. Just the fact that somebody can be sexually exploited and violated, and the first thought that crosses somebody?s mind is to make a profit from it. It?s so beyond me. I just can?t imagine being that detached from humanity. I can?t imagine being that thoughtless and careless and so empty inside.?

In the cover story, the Hunger Games star vents her frustration not just with the offending hackers but also with those?including people she knows?who viewed the images online. ?Anybody who looked at those pictures, you?re perpetuating a sexual offense. You should cower with shame. Even people who I know and love say, ?Oh, yeah, I looked at the pictures.? I don?t want to get mad, but at the same time I?m thinking, I didn?t tell you that you could look at my naked body.?

Lawrence also shares a message for the tabloid community: ?You have a choice. You don?t have to be a person who spreads negativity and lies for a living. You can do something good. You can be good. Let?s just make that choice and?it feels better.?

Lawrence speaks of the wrenching moment when she had to call her father about the hack. ?When I have to make that phone call to my dad and tell him what?s happened ? I don?t care how much money I get for The Hunger Games,? she says. ?I promise you, anybody given the choice of that kind of money or having to make a phone call to tell your dad that something like that has happened, it?s not worth it.? She allows herself to joke a little about that terrible moment: ?Fortunately, he was playing golf, so he was in a good mood.?

With her words now out in the open, the F.B.I. on the case, and a billion-dollar franchise to carry over the finish line, Lawrence seems to be regaining her footing.

?Time does heal, you know,? she tells Kashner. ?I?m not crying about it anymore. I can?t be angry anymore. I can?t have my happiness rest on these people being caught, because they might not be. I need to just find my own peace.?

In Kashner?s more than 3,000-word piece, Lawrence speaks extensively about a variety of subjects, including what she needs in a relationship (?I would so much rather be bored than excited and have passion?), her adoration for the Real Housewives franchise, and her love for comedian Larry David. Kashner also speaks to Hunger Games director Francis Lawrence, Serena director Susanne Bier, and actor Woody Harrelson, who says of Lawrence, ?You know, it?s not terrible, people telling you you?re great; what?s terrible is when you start believing it. She never got fucked up.?

Jennifer Lawrence and Nicholas Hoult in a pub in London