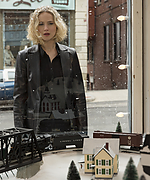 Jennifer Lawrence on The Hunger Games and her character Katniss Everdeen for Amazon.com