(via Gossip Center) Showing off her newly darkened brunette coif, Jennifer Lawrence dashed through traffic as she made her way to the Ed Sullivan Theatre in New York City on Thursday evening (May 19). The 20-year-old “Winter’s Bone” actress was on hand to visit the “Late Show with David Letterman” while fresh off of the release of her debut photo in character as Katniss Everdeen for “The Hunger Games”. Enjoy the pictures of Jennifer Lawrence visiting ‘The Late Show with David Letterman’ in NYC (May 19). Below you can check one part of the interview as well. Full interview you can watch here. 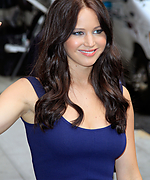 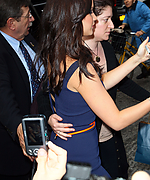 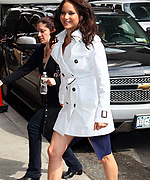 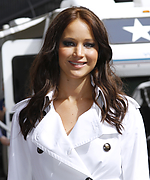 —
by admin
—
No comments
Photos • The Hunger Games

Yesterday Jennifer not only visited Late Show with David Letterman, as well as promoting “The Hunger Games” at MTV Studios. As we can see, she replaced her Altuzarra dress and Alexandre Birman heels with striped cardigan, white t-shirt and jeans. I’ve added about 15 photos to our gallery, so check them out! 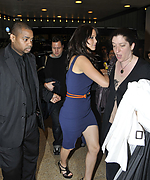 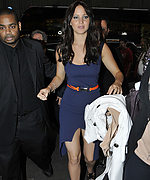 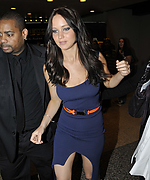 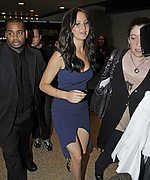 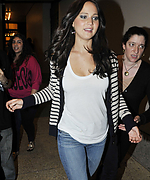 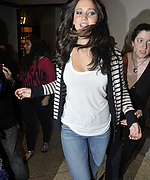 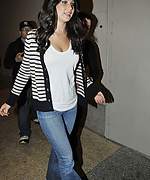 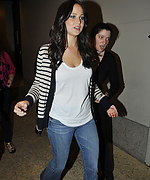 Another day, another scene! Posted by Access Hollywood, the new clip features Hank inviting Mystique down to the Blackbird hanger to take some blood samples. Ashamed by his mutation, he is trying to make a serum that could make him appear normal and considering Mystique’s ability to change her appearance at will, he thinks that her blood may be the key. Whether that’s true or not is a different story entirely. Check out the clip below!

And this is the second part of Access Hollywood interview and this time, Jennifer talks about taking on the role of Mystique in the new movie, “X-Men: First Class”, what advice Rebecca Romijn (who had previously played the role in the film franchise) gave her and what we can expect from the prequel. She also mentions James McAvoy and Michael Fassbender, so it’s really worth seeing!

—
by admin
—
No comments
The Hunger Games • Videos

Jennifer Lawrence has immersed herself in the role of Katniss Everdeen in Lionsgate?s adaptation of Suzanne Collins? “The Hunger Games” and she?s starting to feel like another big screen action star in the process.

?It was fantastic!? the 20-year-old actress told Access Hollywood on Thursday, when asked about landing the coveted role. ?It was great because I was such a huge fan of the books before I even knew about the movies,? she explained. ?I feel like a fan that gets to dress up? It was really, really great.?

The ?Winter?s Bone? Oscar nominee said she and co-stars Liam Hemsworth and Josh Hutcherson have started intense training at a stunt camp for the upcoming movie.

?I love archery! I really love it,? the actress told Access. ?And I?m starting to do stunts with the bow and arrow, so I kind of feel like Hugh Jackman. And then I?m doing rock climbing [and] tree climbing.?

The actress, who is also appearing in the upcoming ?X-Men: First Class,? said her past diet regime for the mutant shape shifter Mystique is helping her prepare to play Katniss.

?We all pretty much have to get in supernatural shape for this,? she explained. ?The dieting probably for ?X-Men? is helpful.?

Jennifer ? who is now sporting long dark locks ? laughed off complaints made by some about her not having the same hair color as her District 12 Tribute character.

?It was funny because everyone was upset that I was blonde, and I was like, ?I?m gonna dye it,?? she said.

?The Hunger Games? is set to begin filming in North Carolina, and the film will hit theaters on March 23, 2012.

—
by admin
—
No comments

Page 227 of 230 « Previous 1 … 224 225 226 227 228 229 230 Next »
Welcome to Jennifer Lawrence Online! JenniferLawrence.org is a fansite devoted to the actress Jennifer Lawrence. Here at Jennifer Lawrence Online you will find all the latest news, images, videos and information on Jennifer and her continued career. If you have any questions, concerns or donations please contact me and you will get full credit. Stick with us, look around, and enjoy your stay!